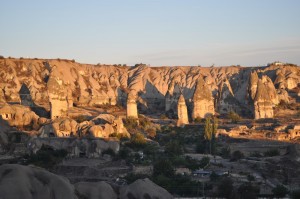 You’ll never imagine where I’m writing this post. I’m snuggled inside a volcanic cone-shaped cave, toasty warm from the fire while it’s a drizzly 5C outside, in Cappadocia (see a picture of our suite). It’s an amazing region, rich in “fairy chimney” formations, which have been used as homes, churches, and monasteries since at least the 11th century. The cave I’m in has 4 stories of rooms, all hollowed out by hand in the 5th or 6th century. We could have a huge party and sleep 10 easily here – it’s much bigger than my Toronto apartment! We wish you were here with us! Some of the other caves are just simple rooms. It’s a historical area, protected from new cave development or changes.

Yesterday we visited 11th and 12th century byzantine cave churches. They were very small, often used by monk and hermit communities of less than 20 people. I was just in awe of the carved apses, altars, and 800-year old paintings, artistically and spiritually beautiful, and most of them beautifully preserved. One had 15 paintings of the life of Jesus; some celebrated Saint George, Saint Barbara and Saint Catherine. A Greek Orthodox priest with his friends sung a hymn in the “dark church,” which was the largest with the best preserved paintings. It was very moving. 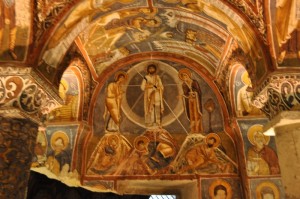 I read of another Biblical places that I’ve been to in Acts 20 — Miletus, where my favourite Roman theatre remains to this day. I climbed its many steps to the top, and walked under its arched second-story roof that reminds me of the corridor in the SkyDome where you can buy drinks. A Turkish family waved to us when we were on the ground and asked us to take their picture, and some Kurdish girls spontaneously gave me a fresh cotton-branch bouquet; they were taking a break from a back-breaking day of cotton picking amongst the ruins in their backyard. On the way out of the village I met the girls, their teenage friends, and old women who were picking cotton in the hot sun. I asked to pick up a bag of cotton to test its weight – those fluffy balls were 60 lbs! What a hot, hard job, and only women were picking. The traditional life was so evident in the simple homes, each with its own olive tree and goat. I love the Turkish hospitality, which is so warm and genuine.