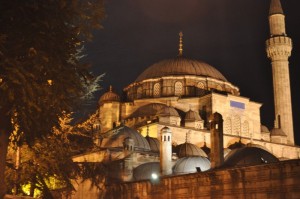 We’re in Turkey now, our first full day. If possible, I may love it more than Greece – 2 more weeks here will reveal the verdict. Great food, warm people, warm weather… I must say, Toronto seems very far away. The morning started with a visit to the Blue Mosque. I removed my shoes and donned a veil, and joined a throng of other visitors to see the site. The exterior architecture is the most impressive feature.

A Turkish man took it upon himself to guide us around the mosque in return for a visit to his carpet store. He wouldn’t accept a tip, but was handsomely rewarded as we decided on two carpets to bring home over cups of tea served on a brass platter by a midget. I felt like it could have been the 18th century. Then we immersed ourselves in the history of the Hagia Sophia, the 4th century church which became a mosque during the Ottoman empire. It was huge, with some Christian mosaics preserved or restored — I imagine restored, as depictions of people are forbidden in a mosque. We had a wonderful time taking photos and videos in the Grand Bazaar, and squeezed in a little shopping as well. Where on earth will I wear those harem pants???

So I truly enjoyed the start of our Turkish adventures.

Tech guru, multimedia enthusiast, and world traveler promoting storytelling for peace
View all posts by Charis →
This entry was posted in Travel Adventures and tagged History, Turkey. Bookmark the permalink.